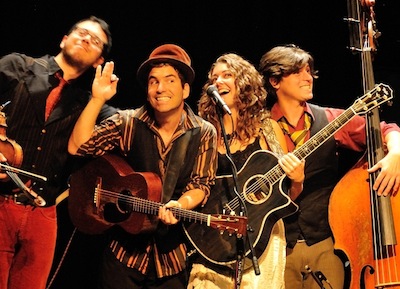 A unique blend of gypsy swing and popular music
Saturday, May 24, 2014 7:30 PM
At the Roxbury Arts Center
Advance Tickets: $18 Adults, $16 Student/Senior
All Tickets Day of Performance: $23

If Django Reinhardt, the cast of Stomp and the Beatles all had a party at Tim Burton’s house, Caravan of Thieves would be the band they hired. Driving gypsy jazz rhythms, acoustic guitars, upright bass and violin lay the foundation for mesmerizing vocal harmonies and fantastic stories. It’s theatrical and humorous. It’s musical and intense. It entertains, dazzles and defies classification while welcoming the spectator to join the band throughout the performance in momentary fits of claps, snaps and sing-alongs.

Like many families, this one started with a married couple – Fuzz and Carrie Sangiovanni, (guitar, vocals, various percussive “instruments”) writing and performing as a duo. In the spring of 2008, Fuzz and Carrie extended their family to include fiery violinist Ben Dean and double bass madman, Brian Anderson completing their colorful vision. Since then, the four of them ran away from home and never looked back.

Within that first year, the Caravan of Thieves began to win immediate praise for their unique blend of gypsy swing and popular music, inspiring them to record and release the debut full-length album Bouquet (2009). To accompany this collection of dramatic and satirical tales, they built an interactive stage set of percussive junk and the ragtag quartet took their newly animated show on the road, sharing stages with world renowned artists such as Emmylou Harris, Dan Hicks, Glen Campbell, Nanci Griffith, The Decemberists, Keb Mo, Tom Tom Club, Iron and Wine, Punch Brothers, Tony Trischka, John Hammond, John Jorgenson and many others. The Caravan successfully connected with audiences on each of these diverse bills, proving their act to be understood and appreciated by folk, pop, rock and jazz audiences of all ages.