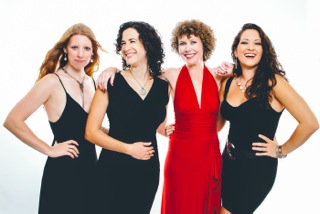 Traditional and contemporary folk music from Ireland, Australia and the US
Saturday, May 3, 2014 7:00 PM
At the Roxbury Arts Center
Advance Tickets: $20 Adults, $18 Student/Senior
All Tickets Day of Performance: $25

Through stunning three part harmonies bedded against the plush melodic landscape of the flute and double bass, The Jammin’ Divas draw the audience into an experience that transcends three continents history by sharing songs and stories of how each country culturally influence and enrich one another.

At this performance you can expect the Divas, Aoife Clancy (Ireland) of the Grammy Nominated group Cherish the Ladies, Nicole Zuraitis (USA), Kath Buckell (Australia), and Hadar Noiberg (Israel) will blend stunning renditions of traditional and contemporary original folk music and elements of improvisation from each of their cultures.

Aoife Clancy from Ireland, is the daughter of Bobby Clancy of the Clancy Brothers and is a member of the Grammy Nominated (band, group?) Cherish the Ladies. Aoife has had a long-standing career touring with the likes of The Clancy Brothers, Christy Moore of the Furey Brothers, Tommy Sands and many others. For the past four years, Aoife has toured extensively doing no less than two hundred dates a year throughout the United States and Europe. She has been a featured soloist with orchestras such as the Boston Pops and Cincinnati Pops and, while performing with Cherish the Ladies, collaborated with the Boston Pops on their Grammy nominated Celtic album. Now with seven recordings under her belt in the last decade, Aoife has clearly established herself as one of the ‘Divas’ of Irish and contemporary Folk Music.

American singer, songwriter and pianist Nicole Zuraitis has been turning heads with her huge voice and catchy melodies. In fact, in 2009 Suzanne Lorge from ALL ABOUT JAZZ recognized Zuraitis as “…the big-voiced, well schooled singer”. She reflects a broad mixture of jazz, pop, r&b and indie fusion where she bridges the gap between genres and unleashing her unparalleled vocals. In 2013, Zuraitis was recognized as a finalist in the Songdoor International Songwriting Contest, as well as selected for the New York City Battle of the Boroughs Competition.

From her roots in a small Australian country town in the heart of the farming district of Northern Victoria to opening for such acts as Jewel and Ben Taylor son of James Taylor and Carly Simon, talented singer-songwriter Kath Buckell captivates audiences wherever she travels. In classic troubadour style she connects to her audience with her heartfelt stories of the Australian land and its people. Her earnest connection with her audience exudes wisdom far greater than her years. Her voice is rich, raw and passionate and evokes some of folk music’s greatest female artists.

Hadar Noiberg hails from Israel growing up with its eclectic musical culture. Hadar was surrounded by various musical styles that are a part of the Israeli melting pot; Middle Eastern, Eastern European, Yemenite and Moroccan Music to name a few. Hadar’s brilliant tone, energy, charisma, and flair for engrossing musical compositions and arrangements has attracted many artists such as Dave Valentine, Anat Cohen, Omer Avital, Joel Frahm, Alvester Garnette, Junior Rivera, Louis Kahn, and Rufus Reid with whom she has performed. “…Noiberg is an extremely gifted flutist who manages to bring out the deep colors and soul of her flute. With it she presents music that is nevertheless jazzy, and yet still reminiscing of Israeli music, of home.” – Lilit Vagner, Yediot Agaronot (nation Israeli newspaper)