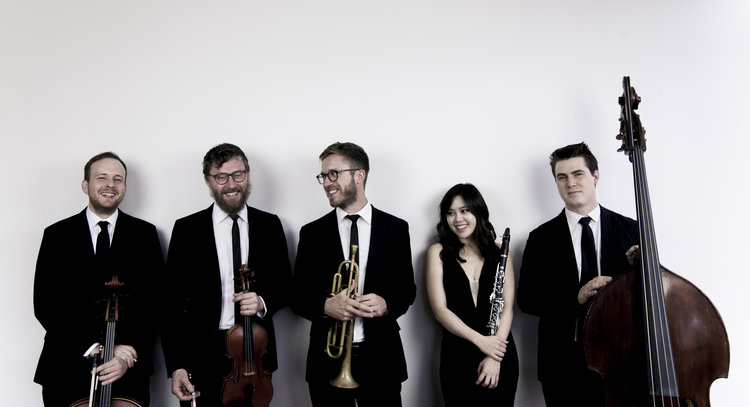 “An idiosyncratic quintet featuring versatile chamber music players who double as singers and songwriters” (The New Yorker), Founders was awarded both 1st Prize and Audience Choice Award at the international SAVVY Chamber Music Competition in 2020. Merging the talents of five conservatory trained musicians from New York City, Founders is re-defining the role of the classical ensemble for the next generation.

In 2021, Founders released their second album to critical acclaim, Songs for the End of Time, Vol. 1 – a full length arrangement of Olivier Messiaen’s Quartet for the End of Time. Written and premiered in 2019, Founders sought to bring attention to Messiaen’s historical masterpiece, using their own contemporary musical language, combining jazz, Eastern European folk, Gregorian chant and singing sacred texts. “Almost miraculously, Founders have restored the earthiness of Messiaen’s music without compromising its deeply spiritual and profoundly Catholic sensibility.” (The Wire)

Founders began in 2014 through the collaborative efforts of Russell and Ridenour. From the beginning, they pioneered bringing the composer back onto the stage, assembling an ensemble of prize-winning performers, writers and arrangers. In 2015 they co-produced their first album, You & Who which the New York Music Daily stated, “Their excellent debut album… is like nothing else out there right now.”

In 2018, Founders recorded selected works from their American Excursions program, highlighting composers, folk musics, and poets from American history. The works featured Samuel Barber, Duke Ellington, and Louis Armstrong, as well as a song-cycle utilizing the poetry of Edgar Allan Poe. This multifaceted program celebrates the rich diversity of American culture, while accentuating the unique strength of Founders as a composing ensemble.

Founders passionately advocates training the next generation of musicians to expand their breadth of creative influence. As artist-educators, the group teaches students to seek out interdisciplinary collaborations, using music as a way to connect to other artists. Founders also encourages students to create music that speaks to the communities and cultures they come from, to meaningfully integrate their way of life with their art. As part of their 1st Prize award at the SAVVY Chamber Music Competition, Founders will be Artists in Residence at the University of South Carolina in the Winter of 2022, where they will present various workshops including Crucial Habits for Songwriters; Innovative Arranging; and The Classical Improvisor.

Tickets available soon! Please watch for our social media posts and sign-up for our weekly emails.