You can’t keep this autumn tradition in the Catskills down! The first snap of autumn, the vibrant colors on the mountainside, and the scent of harvest means its time for FIDDLERS! We are thrilled to welcome several exceptional musicians to this year’s event where we celebrate the tradition of fiddling.

Schedule for the day:

Please note that, sadly, there will be no square dancing or food served at FIDDLERS! this year. 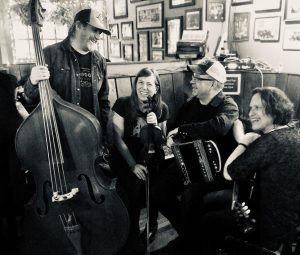 The Empty Bottle Ramblers play traditional Cajun dance music from southwest Louisiana. Based in Massachusetts and upstate New York, they first came together as EBR at the Augusta Heritage Center and focus on driving accordion two-steps and aching twin-fiddle waltzes sung in Cajun French.

Missy Roser (fiddle, vocals) fell in love with this music after a misspent youth in orchestras and string quartets, traveling to study with Cajun standard-bearers on a range of instruments. Erica Weiss (guitar, vocals) has been learning from and playing with mentors from Louisiana for years and is well known as an old-time musician, caller, and dance instructor. Missy and Erica are also longtime members of legendary Cajun musician Jesse Lége’s band, Bayou Brew, and have regularly appeared on the stage of Festivals Acadiens et Créoles in Lafayette and festivals all over the Northeast and mid-Atlantic. Tim Kness (accordion, vocals, fiddle) has longtime ties to this community as a dancer and musician; he’s also begun making a name for himself forging Cajun triangles in the old style. Danny Birnbaum (upright bass) rounds out EBR and travels often to the Cajun parishes for festivals and visits, besides regularly lending his talents to old-time and country bands. 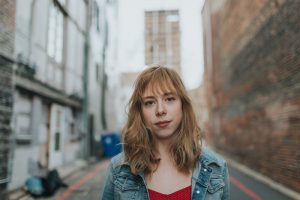 Vivian Leva‘s voice is the sound of living tradition. Raised by parents who absorbed ancient tunes and ballads during visits to legendary old-time musicians, Leva grew up steeped in the Appalachian and country music of her Lexington, VA home. Though still in college, Leva’s musical roots run deep. She grew up going to fiddle festivals with her parents, both acclaimed roots musicians themselves who perform as the duo Jones and Leva. Her father, James, is a respected multi-instrumentalist who learned knee-to-knee from old-time legends like Tommy Jarrell and Doug Wallin, while her mother, Carol Elizabeth, picked up bygone songs from a now lost generation of singers and recorded with the pioneering bluegrass duo Hazel Dickens and Alice Gerrard. Leva soaked up this influence at a young age, and, at age 9, began penning songs and performing with her father at venues like the prestigious Carter Family Fold.

Traditional American music was an early influence on her songwriting. Her time at music festivals (she’s never missed a Clifftop) regularly landed her in jams with roots music heavyweights like Dirk Powell, Caleb Klauder, and Pharis & Jason Romero. “The biggest part of traditional music has always been the community,” she says. “It’s really special that you can travel almost anywhere and share tunes with a group of people that you’ve never met.” In this spirit, she joined The Onlies, a young stringband that won the coveted traditional band competition at the 2017 Clifftop festival in West Virginia. Add to this performance resumé teaching stints at The Swannanoa Gathering, The Big Sur Fiddle Camp, and Centrum’s “Voice Works” and her roots music bonafides are obvious, but it’s Leva’s songwriting that’ll bowl you over.

Sami Braman (she/her) has been playing the fiddle since she was 6 years old, coming up amid the music festivals and jamming communities of the Pacific Northwest’s vibrant traditional Old-Time music scene. Under the instruction of fiddle tradition-bearer Ruthie Dornfeld, she studied both classical and fiddle music. At 8 she and her long-time musical buddies Leo Shannon and Riley Calcagno formed The Onlies, which plays at festivals and gigs around the country and whose traditional Old Time sound they further refined in 2016 with the addition of acclaimed folk musician Vivian Leva.

Sami is a buoyant, intuitive, and versatile fiddler who values deep understanding of the stories behind the tunes and seeks inspiration from historically marginalized artists.  She most frequently plays in the Old-Time, Cape Breton, and Bluegrass styles, but her enthusiasm extends in many directions, including Irish, Scandinavian, Scottish, and jazz. Sami now teaches and performs across the U.S., primarily with The Onlies. She has appeared onstage alongside Laurie Lewis, Bruce Molsky, Elvis Costello, Darol Anger, Tatiana Hargreaves, Kristin Andreassen, Critter Eldridge, Cahalen Morrison, Eli West, Pharis & Jason Romero, Meshell Ndegeocello, and Altan. In her tune-writing, Sami melds creativity with tradition, producing a number of old-time tunes which have made their way into festival sessions across the country.  In her teaching, she brings positive engagement and a high standard that encourages and challenges students. Sami recently moved to Nashville, TN, to pursue music full-time. To all her projects Sami brings joyful energy, a driving bow, and an abiding love for the traditional music community which formed her.

Jourdan Thibodeaux is the guy you picture when someone says the word “authentic.” Straight from the blackjack boggy woods of Cypress Island, Louisiana, Jourdan is one of only a small number of young people speaking Cajun French today. His musical ability and his crafty songwriting which is at once classic and progressive has afforded him a band comprised of some of the finest artists in Acadiana today. 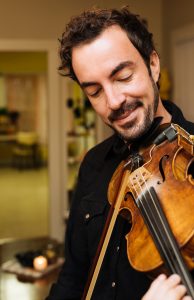 The son of Cajun music royalty Marc and Ann Savoy, and founder of the Louisiana-based label Valcour Records, Joel Savoy is a GRAMMY-winning recording engineer and record producer as well as a ten-time GRAMMY nominee. Recently appointed the Artistic Director of the Festival of American Fiddle Tunes in Port Townsend, Washington, Joel is a versatile fiddler and guitarist and he has played and taught music around the world for the last 20 years. He has worked with the best in southwest Louisiana as well as with folks like John Fogerty, Linda Ronstadt, Steve Earle, and T-Bone Burnett, although most often he’s seen with his brother Wilson and their parents in the Savoy Family Cajun Band or with the legendary Cajun powerhouse Jesse Lége. In 2017 he was an ICON Award honoree in Lafayette, Louisiana, for his contributions to the area’s art, business and culture, and in 2018 he became the curator for the esteemed Louisiana Crossroads concert series at the Acadiana Center for the Arts in Downtown Lafayette. He also served as a governor on the board of the Memphis Chapter of the Recording Academy for three years and as the chapter Vice President for a year and has appeared on the big screen in The Divine Secrets of the Ya-Ya Sisterhood, All the King’s Men, HBO’s Tremé and Anthony Bourdain’s No Reservations and Parts Unknown. 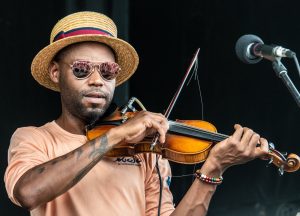 Cedric Watson is one of the brightest young talents to emerge in Cajun, Creole and Zydeco (Louisiana French) music over the last decade, Cedric Watson is a four-time Grammy-nominated fiddler, singer, accordionist & songwriter with seemingly unlimited potential. Originally from San Felipe, TX (population 868), Cedric made his first appearance at the age of 19 at the Zydeco Jam at The Big Easy in Houston, TX. Just two years later, he moved to south Louisiana, quickly immersing himself in French music and language. Over the next several years, Cedric performed French music in 17 countries and on 7 full-length albums with various groups, including the Pine Leaf Boys, Corey Ledet, Les Amis Creole with Ed Poullard and J.B. Adams, and with his own group, Bijou Creole.

With an apparently bottomless repertoire of songs at his fingertips, Cedric plays everything from forgotten Creole melodies and obscure Dennis McGee reels to more modern Cajun and Zydeco songs, even occasionally throwing in a bluegrass fiddle tune or an old string band number. Unlike many of his contemporaries, he is also a prolific songwriter, writing almost all of his songs on his double row Hohner accordion. Cedric’s songs channel his diverse ancestry (African, French, Native American and Spanish) to create his own brand of sounds.

Cedric’s albums are a tapestry of pulsing rhythms and Creole poetry, and his live performances are unforgettable, all at once progressive and nostalgic.

Guests will be required to wear masks when they arrive at the Roxbury Arts Center and while they at the venue.

Hand sanitizing stations will be available throughout the building. Seats and common areas with be cleaned and sanitized prior to the performance.

If you are not feeling well, please do not attend the performance.

Guest-pods will be spaced 6 feet apart from each other. Please purchase your pod tickets together in the same transaction.

The Roxbury Arts Group will collect tracing information from guests. You can expedite this process by purchasing your tickets in advance using the online process below.