Katie Martucci, Caroline Kuhn and Lucia Pontoniere met in the fall of 2014 – all incoming students to the New England Conservatory. At that point in time, they were the only three women in the undergraduate Contemporary Improvisation program. Seeking fellowship, Katie, Caroline and Lucia banded together. Hours spent singing and playing together in the NEC dormitories led to a house concert at a friend’s house. Soon, the trio was performing regularly around Boston as “The Ladles.” (A name fashioned after an altered “ladies room” sign in Jordan Hall.) Within a year The Ladles had recorded their debut EP and started touring the Northeast. 2019 marked the release of The Ladles’ first full length album ‘The Line.’ 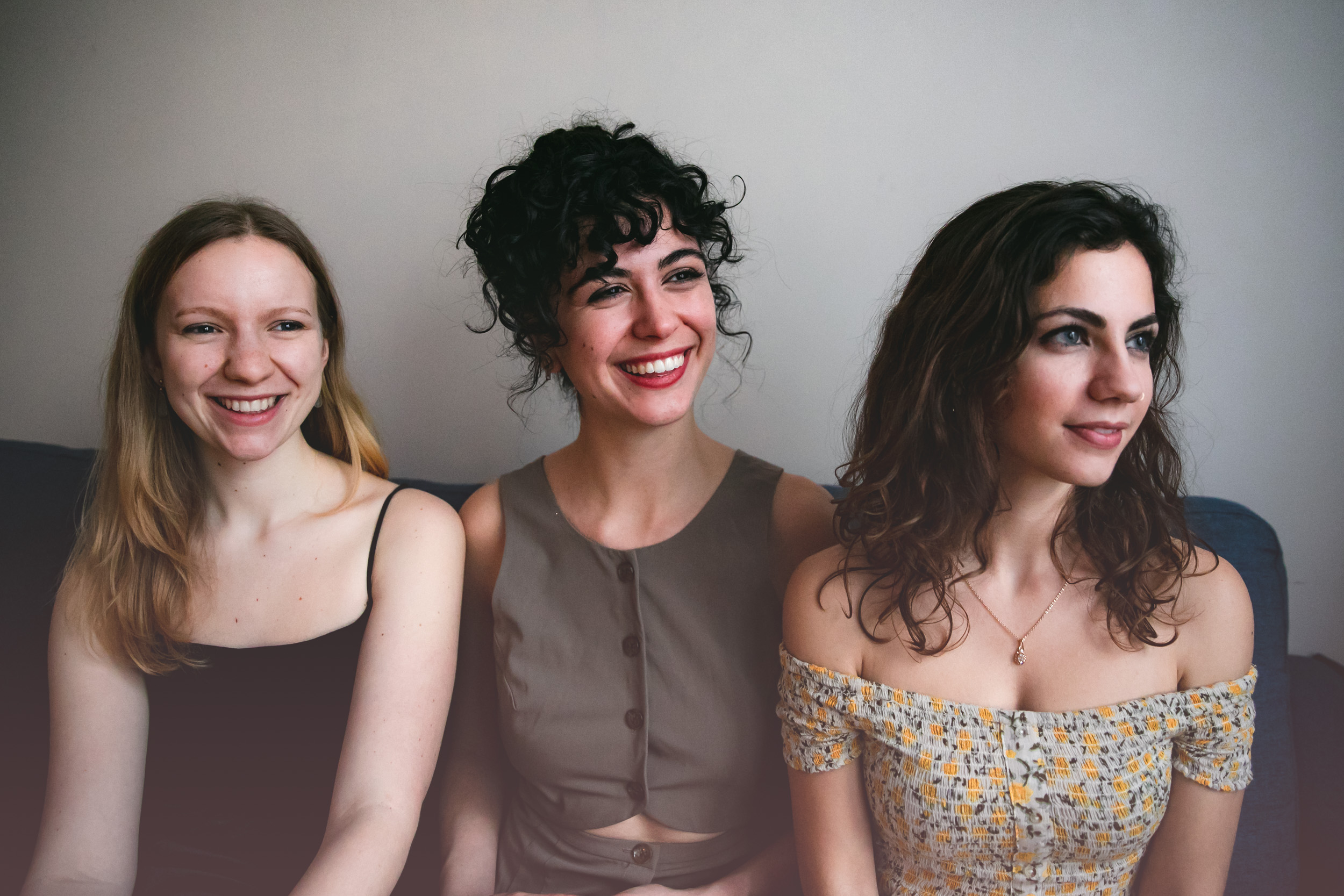 Hailing from the Catskill Mountains in upstate New York, Katie Martucci grew up singing, and playing fiddle and guitar. After a brief stint of collegiate acapella at Skidmore College, Katie rejected a possible future as a historian at the State Department, and transferred to the New England Conservatory. While at NEC, she studied voice, songwriting and arranging in the Contemporary Improvisation Department, and formed The Ladles with Caroline Kuhn and Lucia Pontoniere. Today, Katie is based in Brooklyn, NY. When she’s not playing with The Ladles, Katie performs with the creative collective, Apartment Sessions, leads the Tucci Swing Orchestra, and performs her original music with the Katie Martucci Band.

A recent graduate of The New England Conservatory of Music, Caroline Kuhn spent the last four years completing her degree with a focus on songwriting and contemporary vocal music. After spending time in Boston building upon her extensive experience singing harmony in a variety of styles (from choral to jazz), she returned to her native New York City. Caroline began her career in NYC at the age of five, recording jingles and doing an assortment of voice-over work. Outside of The Ladles, Caroline regularly performs with several New York City-based projects, such as folk group Ruthless Moon, Damon Smith, and the Tucci Swing Trio. When she is not performing with one of them, she is playing her original music- with a newly formed backing band.

Lucia Pontoniere grew up in the San Francisco Bay Area. At the age of six, she began competing in local fiddle competitions. Three years later, she was accepted to the Young Musician’s Program at UC Berkeley. There, she began a classical journey, and was awarded a scholarship to attend San Domenico School and play in their award-winning orchestra. In 2014 Lucia attended New England Conservatory’s Contemporary Improvisation Department, where she and two classmates started the band The Ladles. She transferred to Berklee College of Music, where she got her Bachelor’s in Violin Performance and American Roots. Lucia lives in New Orleans now and is working on constantly evolving as a musician.

Tickets can be reserved for this FREE performance by calling the Roxbury Arts Group at 607.326.7908