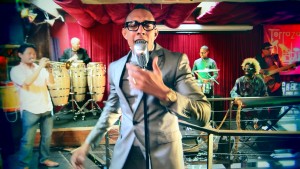 Kick-off the summer with the moves and sounds of Gerardo Contino y Los Habaneros, a gritty, witty and streetwise 7-piece band! A salsa-dance lesson precedes this party-performance at the Roxbury Arts Center this Memorial Day Weekend.

Gerardo Contino, “El Abogado de la Salsa,” is a Cuban singer and songwriter who has been a part of a number of renowned Cuban bands in Havana since his youth. Before leaving Cuba in 2009, Gerardo was the lead singer for NG La Banda, one of the most recognized Cuban Salsa and Jazz orchestras in Cuba, under the directorship of Jose Luis Cortes. Since 2012, Gerardo started his own band, Gerardo Contino y Los Habaneros, in New York City with Axel Tosca Laugart, Luisito Quintero, and John Benitez. Their debut album, “Somos Latinos,” was released to critical acclaim in 2013, and they were selected by WNYC/NPR as Manhattan’s Best Band of 2015.